Society are donning Air Jordans* and bumbags, whilst popping on a bit of classic Britney, or having a weep over Leo and Kate flying at the front of the Titanic. Or, if they are anything like us, (and all the best people are) they are endlessly watching reruns of The Crystal Maze and having all the nostalgic feels over watching teams crack the maze and conquer the Crystal Dome.

In this post, we are having a trip down memory lane and paying homage to all the hosts The Crystal Maze has had in it’s run.

The hosts (or Maze Masters, as they came to be known) were the sarcastically-beating heart of the show. Seriously, if you took a stethoscope to the chest cavity of The Crystal Maze, you’d hear them going boom-boom.

So on that joke (that probably doesn’t translate well to the written word), let’s take a look at our beloved Maze Masters of yesteryear.

*other trainer brands are available. 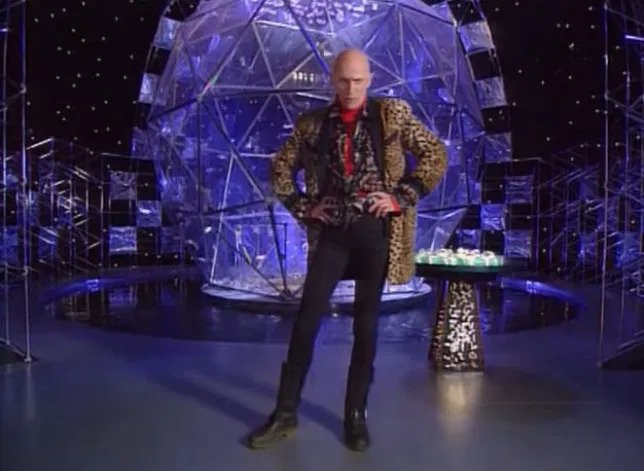 Who was the original host of The Crystal Maze?

The OG of all Maze Masters was the one and only Richard O’Brien.

The leopard-print clad keeper of all our hearts. The show started in 1990, and it was Richard O’Brien at the helm of the good ship Crystal Maze, steering us through the first four glorious seasons.

O’Brien ran contestants through the maze, donning his iconic print blazer and an ironically raised eyebrow throughout.

As the first host, O’Brien is arguably the most memorable and most loved of all the Maze Masters.

Could it be his biting humour, weird commentary, or the harmonica playing?

Whatever it was, he brought undeniable charm with an understated edge to The Crystal Maze that was both funny and enjoyable to watch. He was able to say what much of us were thinking, and this only brought him closer to the viewers.

When it came time for Richard O’Brien to depart the Maze, the Crystal Baton was passed on to Ed Tudor-Pole, who hosted for seasons five and six from 1993 – 1995.

Ed Tudor-Pole had a slightly gentrified look, with a delightfully opulent layering of Georgian-style waistcoats.

Rather than trying to replicate O’Brien’s style, Tudor-Pole put his own spin on things. He was more connected with the competitors, rooting for them and showing sympathy when things didn’t go to plan.

Ed Tudor-Pole’s run as host came to an end when the show went off the air in its original format in 1995. 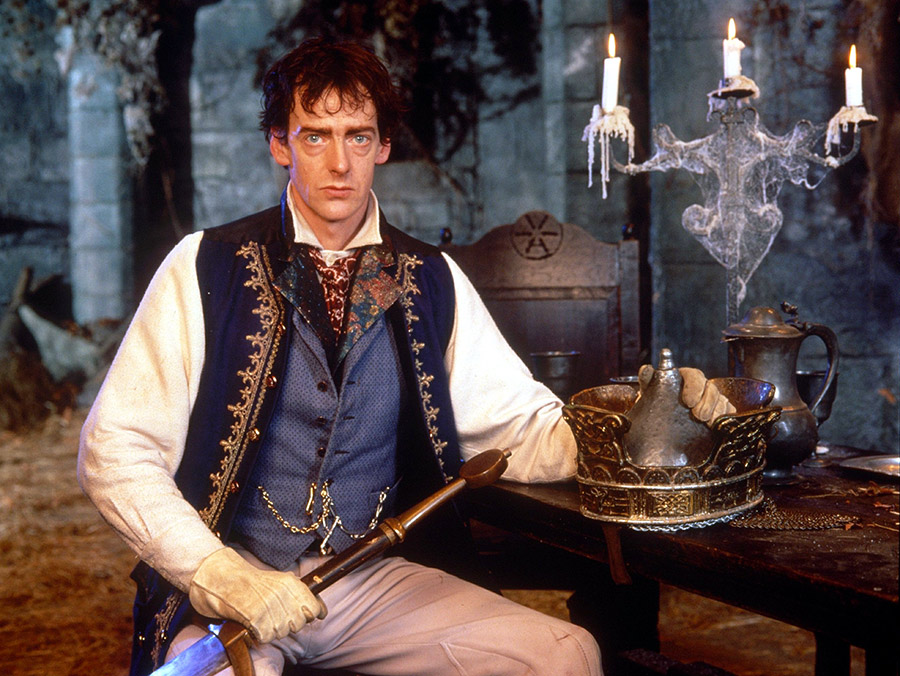 Even though Richard O’Brien often has the strongest association with the TV show, he only presented the show for three years. Despite this, the question often lingers. “But Richard, why, why did you leave us?!” *grabs air far too dramatically*

When asked the question in 1998, Richard said;

“If I [stayed] much longer I [wasn’t] going to be able to do anything else,” he said. “I did four movies shortly after that and I don’t think I would have been allowed to have done them if I’d stayed as a game show host, so it was the right decision for me.”

So, off O’Brien and Mumsie went, riding off into the Californian Sunset together.

Stephen Merchant hosts the Stand Up to Cancer Special in 2016

After the show finished its original run in 1995, it lay dormant until 2016, when the show was revived for a one-off celebrity special for Stand Up To Cancer.

Our host this time was Stephen Merchant, in a one-time only appearance. He very much took on the quirky look and vibe of the original hosts, and joked with his celebrity contestants.

Did you know: Merchant was asked to take up the Master Master role full time when the show was recommissioned but declined due to other commitments. 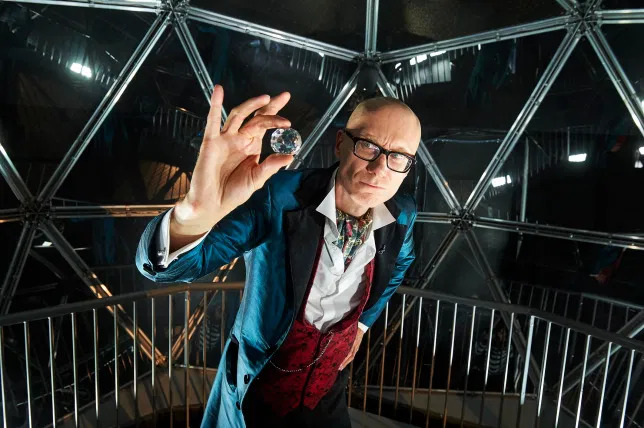 Who is the current host of The Crystal Maze?

This is where we move onto our current, magnificent, host; Richard Ayoade. Ayoade has been presenting the rebooted TV show since it hit our screen in 2017, and has well and truly made the role his own.

Gone are the flouncy costumes, instead replaced by sumptuous suits, that look like they would be lovely to touch.

But don’t even think about actually touching them – Ayoade keeps his contestants at arms length (well, a hand on a stick’s length to be precise, but more on that later), managing to somehow maintain an air of warmth, juxtaposed with literal and figurative distance.

Ayoade has himself described his Crystal Maze persona as a more cerebral and intense version of his character Maurice on The IT Crowd.

With a biting quick wit and new satirical gimmicks and catchphrases, Ayoade often has contestants, and viewers alike, laughing out loud. 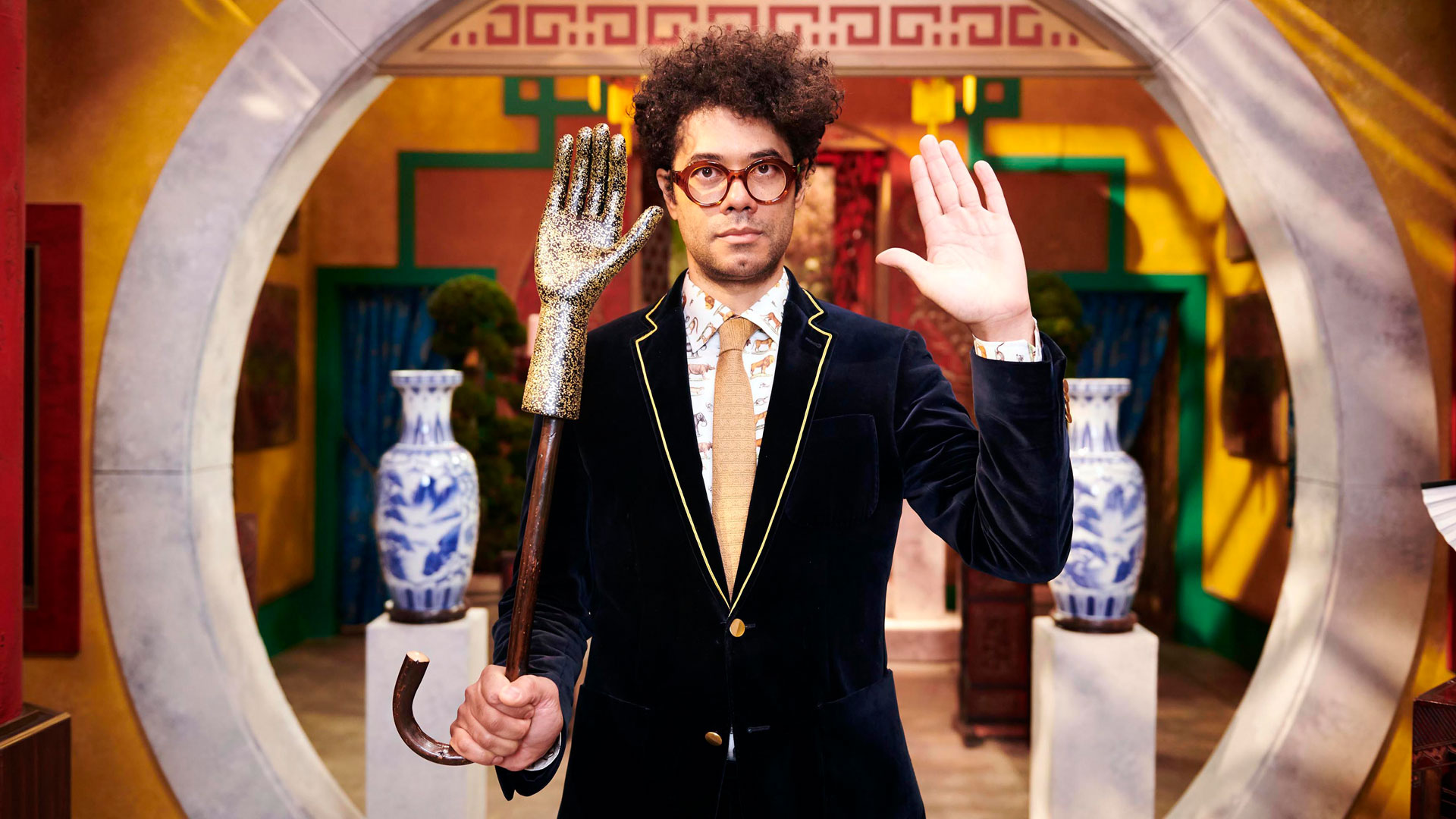 Why does Richard Ayoade have a hand in Crystal Maze?

Ah yes, the plastic hand. Ayoade carries it because his character doesn’t want to have physical contact with anyone. He uses it to lead his contestants hand-in-’hand’ through the maze, and to exaggerate his actions with comedic effect.

According to one of the show’s producers, around 30 exist, as they keep meeting their demise on game doors…

And there we have it. Our love letter to the show’s wonderful hosts. Maze Master extraordinaires and the “crystals” in the crown of the show – we salute you.